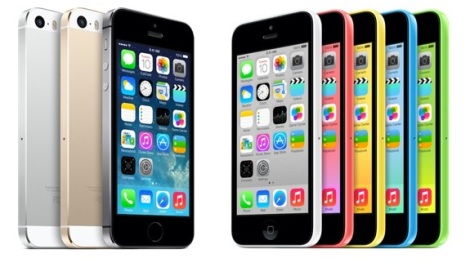 It’s another year and, as Apple fans well know, that time of year again: the announcement of a new iPhone. Many rumors pointed to Apple announcing two iPhones this year instead of the customary one iPhone model and the rumors were spot on. Today, Apple unveiled their iPhone 5S and iPhone 5C. To be honest, it’s a tale as old as time in the phone world. The iPhone 5S sports a faster processor and slightly better camera technology. The newest hardware feature would be the included fingerprint sensor built into the timeless physical home button that can unlock your phone or identify you for app purchases. The 5S also sports a motion coprocessor that will help improve health and fitness apps such as Nike+. The 5S is Apple’s newest flagship phone, so what is the 5C? What does the C stand for? Well, many would say the C stands for “Color” since the iPhone 5C comes in 5 different colors. Others would say the C stands for “Cheap” since it’s made out of plastic instead of aluminum, has iPhone 5 specs, and will be priced at $99. Both are probably accurate with some even saying C stands for “China” since this cheaper option may be more targeted to the Chinese market.

Either way, the announcement of new hardware is the same as every other year. Hardware, today, has become something customers and investors simply do not care as much about. There’s newer, better hardware being announced every other month. That leaves software and the way hardware and software integrate. We already know Apple does a superb job integrating their hardware and software. The missing link here is the software then. We heard about iOS 7 back in June at WWDC and it hasn’t changed much since then. It failed to impress me and many others then and continues to. Many people at the time compared iOS 7 to Android 4.0 Ice Cream Sandwich because of how blatantly similar the two are. Apple is going to have to do a lot more to impress people today than just announcing updated hardware, colors, and a slightly tweaked OS. Don’t get me wrong, the iPhone is still a superb phone that works, but it has become stale over the year. Apple, I REALLY want to see you shake things up and soon. As of right now, it’s just another year and another iPhone.