“We have Sony and Microsoft talking about this generation lasting 7,8,9 or even 10 years and it’s the biggest mistake they’ve ever made.”

This is a quote from an interview with Square Enix’s worldwide technology director Julien Merceron. With the next generation of consoles on the horizon, it’s interesting to wonder if what Merceron says is true. Sure, only Nintendo’s hand has been shown with its Wii U with Sony and Microsoft remaining quiet on the next generation console front, but it’s important to ask what the console business model should look like in the face of constantly improving technology. 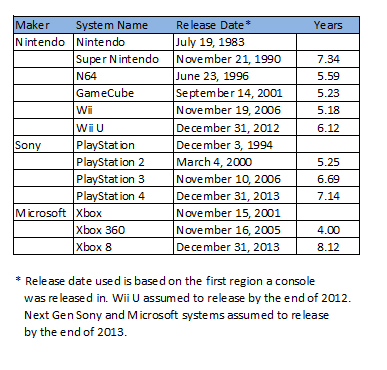 Here’s a quick look at the release schedule for the current three console makers. Nintendo, being the oldest player in the industry, has the most data (sorry folks, didn’t make a bar graph for you guys, so you’ll have to deal with a table instead of a picture representation). Sony and Microsoft’s next console, assuming they release in Q4 2013 will be the longest time between consoles since the original Nintendo and Super Nintendo systems, which came in at 7.34 years.

So why are Sony and Microsoft waiting for so long? Part of the reason stems from the business model of console games. Console makers generally sell the console at a loss, making the bulk of their profits through licensing. Dragging out a console’s effective life time allows the company to make more profit or make up for excessive loss during the development and early life of a console. It usually takes a few years for most consoles to sell at a profit, usually because the cost of components go down as technology improves. However, there are some exceptions to this such as Nintendo’s Wii and DS.

Developers are also able to capitalize on longer console life spans since it gives them more time to create games and get the most out of proprietary software. Square Enix’s Crystal Tools comes to mind. Other licensed software such as Unreal Engine also benefit. In addition, development teams become familiar with the programming for consoles of that generation and can more efficiently produce games for it – unlike when a new console comes out and developers need to spend a lot of time learning the ins and outs. This is especially true with consoles that have unique architecture like in the case of Sony’s PlayStation 3 and its Cell processor.

It is also important to note that games this generation have become prohibitively more expensive. HD graphics take longer to render and the budget for AAA games have gone through the roof. As a Blizzard employee said, there are now the really expensive AAA games and the really cheap mobile games out there today.

Merceron brings up a number of good points about where the video game market is going. Mobile and browser gaming are becoming more prevalent with more powerful phones and advances in cloud. However, I do not feel like these are substitutes for a dedicated gaming console. The experience is completely different. Mobile games rarely provide the same immersion that a console game experience can. These games are often conceived and meant to be consumed in small amounts of time. Square Enix is definitely bucking this trend with its ports of older, robust Final Fantasy games and even Chaos Rings, but for the most part, these mobile games do not satisfy the same itch.

Is it a mistake to wait 7, 8, 9, 10 years in between new console releases? I wouldn’t say it is, necessarily. One thing that has defined most of the generations is a jump in graphics and visuals. I, for one, fall in the camp that says the graphics of the PS3 and Xbox 360 are already quite high. Is there room for improvement? Of course. We’ve seen even better graphics with Agni’s Philosophy and other next gen tech demos, but game play should always come before graphics and I feel that is something that’s been lost in this era of HD gaming. Many games are very pretty on the eyes, but the game play is not up to par. If it’s not the game play, it’s the length of the game. Uncharted, God of War III, Heavenly Sword, and more are beautiful games… that last all of 10 hours.

I truly believe the current era of console could go on for another couple of years except for the fact that both consoles have very limited RAM. This has been a constraint that, to me (I’m no developer), has held back a lot of innovation. Most smartphones released today come with more RAM than these consoles. It’s a good thing the next generation will soon be upon us, but I think in this era of HD games and longer, more expensive development cycles, Sony and Microsoft need to set their eye on building consoles that will truly last 7, 8, 9, 10 years.