I’m quite the tech enthusiast and have no qualms with people who choose Apple’s iOS ecosystem although it’s no secret that I prefer Android. Apple’s iPhone provides users with a seamless user experience that is simple and does what users need well… for the most part. This is why Apple with its latest update to its iOS system, iOS6, has me and many others infuriated. With iOS6, Apple has tossed Google Maps to the side in favor of its own flavor of maps, which aggregates data from 3rd party map providers such as TomTom and OpenStreetMap (A BNP Paribas analyst says Apple aggregates about 20 different sources for its map data). Many speculate the reasoning behind this is because Apple is trying to separate itself from the Google platform. After all, Google and its Android OS hold 68.1% of the worldwide market share, according to the IDC, compared with Apple’s 16.9%. In the U.S., things look slightly better for Apple, but Android is still dominating the market with 51.9% of the smartphone market compared to Apple’s 34.3% based on Nielsen’s July 2012 data.

It’s a smart move for Apple to differentiate itself from its main competitor, but only if the service they are providing is on par with what it’s replacing. This is not the case with Apple’s new maps and it’s the users who are suffering. iOS6 rolled out to devices on September 19 and came pre-installed on the iPhone 5, which launched on September 21. Since then, many users have been complaining about the new maps.

In the U.S., users are forced into poor quality maps such as the one pictured above. While iOS users finally get voiced turn-by-turn directions (4S and 5 only), they are left without public transit navigation and street view options, which can be a deal breaker for urban people living in large metropolis areas such as San Francisco, Chicago, and New York City. Google has spent many years and logged many hours to make their maps as robust as they are today. The Google Cars have gone around everywhere to obtain street view data and where cars could not go, people with high tech backpacks made the trek to capture the wilderness. More recently, Google has partnered with universities to provide more detailed information and even street view of campuses, which Apple’s map option is sorely lacking, as seen in the below picture. 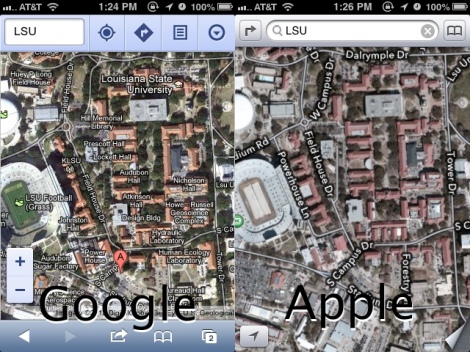 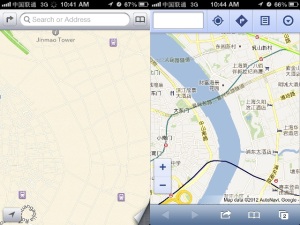 While things seem bad at home in the U.S., things are even worse abroad internationally where the majority of the complaints are being heard. In the example to the left, you can clearly see the lack of detail for Japan. iOS6’s new map is on the left, while iOS5’s Google-powered map is on the right. The entire river is missing and all of the street names are gone. It’s not only limited to Japan either. Examples are pouring in from all over the world – even from first tier cities such as London. In London, the  Hackney Wick railway station (thanks to some friendly commenters for the correction) put up the following sign to make fun of iOS6’s new maps: 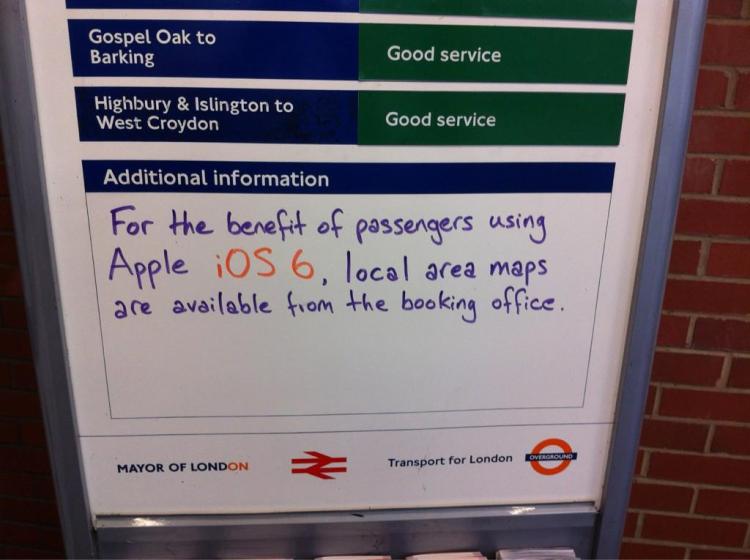 It’s not just the maps that are being criticized either. Apple announced its new feature, Fly Over, which provides an aerial view of select metropolis areas. This “feature” has gotten the ire of many in what critics are calling the iOS6 Apocalypse. Here are a few examples: 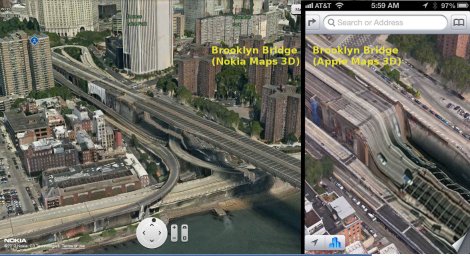 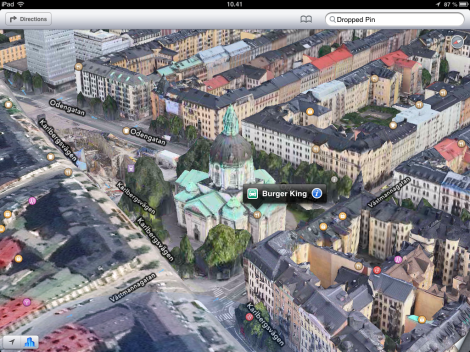 As you can see, the pictures of the areas look like it’s been through some apocalyptic scenario and were taken out of a movie such as 2012. Did the machines rise up against humanity? No, it’s just Apple’s new maps. Or, perhaps, this is how Apple envisions the world looking someday? Is it showing us the future? Perhaps this is a warning of what will happen if Google remains in power and Apple doesn’t win? Who knows.

Apple is well aware of the problems and says it’s “just getting started.” They’re asking their users to be patient with them and reminding them to report problems, keeping in mind that the new maps are crowd sourced. The maps should get better as more and more people use it. Google has yet to say whether or not they intend to release their own Google Maps app for iOS like they did with YouTube, which Apple also abandoned in iOS6. Unlike Maps, though, people generally praised this because the native YouTube app was outdated compared to the website and untying it from the OS provides Google the freedom to update the app as necessary. However, there is no Google Maps app for iOS and there may not be one. iPhone users can still use their browser to navigate to Google Maps as an alternative though.

No doubt it’s Apple’s users who are feeling the brunt of Apple’s war with Google. I can only hope that this entire mess gets sorted out soon because it’s the customer who is losing here by being provided a sub-par user experience. In my opinion, Apple has gone a bit too far and is playing way outside of its sandbox. Apple is best at marrying some of the best software with the best hardware, providing users with a seamless experience. However, their new maps are not even close to the best software and puts Apple’s need of separating itself from Google ahead of its customers’ needs: a detailed map app. Instead of renewing its license with Google, Apple decided to spend millions on acquiring various mapping companies and licensing other mapping data when it could have simply renewed with Google and use the money saved on making iOS6 more robust. As it stands, iOS6 did not provide any revolutionary features for its users like what iOS5 did with notification center, “multitasking,” and Siri. The poor maps have caused some tech bloggers to recommend users to NOT upgrade to iOS6; especially for older models such as the iPhone 4, which doesn’t see the benefits of turn-by-turn directions. For more examples of the sloppiness of Apple’s new maps, check out this Tumblr page.

Update (9/25/12): News is coming out that Apple had over a year left in their contract with Google and chose to preclude their services early. The same sources claim Google is in fact creating an iOS app of its popular mapping service, but it’s still several months down the road and Eric Schmidt, chairman of Google, says it’s up to Apple whether or not it’s approved at the end of the day. The tale of Apple’s newest maps isn’t all bad though. Users of the new maps in China and North Korea have better quality maps than what Google provides. In China, it’s because Google is not an authorized cartographer. On the other hand, Apple has licensed the data from a Chinese mapping company. Apple is also rapidly correcting errors based on user reports, as well, although the entire service still comes across as half-baked or alpha/beta stage.