Today, Sony hosted their PlayStation event in New York and formally announced the coming of their next generation console, the PlayStation 4. Some rumors thought Sony would ditch the numbering nomenclature for this generation because “4” is known as “death” in Japanese culture, but I, for one, am glad Sony did not succumb to tetraphobia because it makes it harder to keep track of the order – just look at Apple’s iPad numbering. Although an actual console wasn’t shown to the audience, we were provided with a glimpse of Sony’s vision for the PlayStation 4 and saw some demos of games in the making for the console. Everything points to the PlayStation 4 being a successful endeavor, assuming Sony can keep the price down and bring the games. If you want to read a bullet version of the new features, scroll down to the last section.

The first big goal the PlayStation 4 set out to accomplish was to make sure the developers who created the games gamers loved were not limited by technology on neither the hardware side nor the network side. I want to say Sony has accomplished this with the following specs:

All About Sharing and Creating a Community 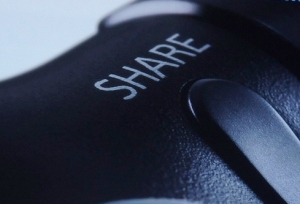 Sony’s second goal was to develop a console capable of sustaining a PlayStation centric platform that mirrors the way consumers interact in a social, always connected world. As a point of reference, when the PlayStation 3 first came out, the original iPhone had not launched and MySpace was the king of social networks. We’ve come a long way since then with a more connected network through Facebook, Twitter, Google+, and various streaming services such as Ustream and TwitchTV. Sony, with the PlayStation 4, aims to create a social experience by teaming up with Facebook and UStream to connect players with their “real” friends. Players will know what games other friends have bought or are currently playing. In addition, players can now stream their games for people to watch straight from their console or record their play via a new “Share” button on the Dual Shock 4. Not only that, but players can allow any friend, no matter where they are in the world, to take control for them to help get through a tough stage. In the past, you’d have to invite a friend over to get their help, but this can now be done online. Players can even enable friends to type help messages that will display on screen or simply talk with a friend through the new headphone jack (or via Bluetooth headset) on the DualShock 4.

Of course, Sony’s new social network that is dedicated to video games will have apps for Android, iOS, and PlayStation Vita, as well as a web interface, so that players can stay informed about what their friends are playing.

Ease of Use for Players – Simple and Elegant

The final piece of the vision was to utilize current technology to make it easier for players to play than ever before. This is what really excites me about the PlayStation 4. First, I must say that the PlayStation 4 will not be backwards compatible with PlayStation 1, 2, nor 3 games; however, Sony aims to address this thorn in its side by utilizing the recently acquired Gaikai streaming service. Sony is hoping to have its entire library of games, including PlayStation 1, 2, 3, and Mobile, be available for streaming via Gaikai. This actually provides a long term solution to backwards compatibility since the games will be processed by Gaikai and simply streamed to the console. Combine this with cloud saves and we are looking at a permanent solution to holding onto multiple consoles, multiple games, and multiple memory cards.

Taking a page from Nintendo’s Wii U, the PlayStation 4 can also use the PlayStation Vita as a second screen to continue playing if the TV becomes occupied. PlayStation 4 games will be streamed from the console straight to the Vita, making the Vita an in-disposable accessory. Some may complain about the cost of owning both a PlayStation 4 and Vita, but I say this method provides consumers with a choice since not everyone will be put in a situation where someone wants to use the TV while playing.

Even more impressive is how Sony is utilizing Gaikai to get games to players faster than ever before. Digital titles purchased online will be playable soon after purchase by streaming the first part of the game while the rest of the game downloads in the background, a strategy similar to Microsoft’s Office 365. Gone are the days where players will have to wait for a full game to download before being able to play. Similarly, games can be demoed for free with the same technology so that players can actually try a game before committing to purchase. Another option is for players to watch recorded gameplay videos from other players to get a flavor for the game. The streaming technology has the potential for destroying part of the used game market if players are able to “demo” the full game without purchase or if players can “rent” a game straight from PSN, both ideas I mused about in an earlier blog post.

Another new addition that will make life easier for players is the new power off save state being implemented. If players need to stop a game to go out, they can simply hit the power button. The game is saved to the memory so that the player will resume from exactly where he left off when he re-powers the console. This is very similar to what handheld consoles have. Needing to find a save point before running an errand will be a thing of the past with this feature.

The Verdict: PlayStation 4 has Potential

Back in November, I proposed One Sony, One Platform, One Community, which was my vision of where Sony should go, and I am happy to say that Sony is going exactly where I hoped they would. Creating a platform for gamers to interact with one another, share videos, and communicate on the go, is integral for a society that is constantly connected. I hope that it’s not just gamers who are connected in this community, but also developers. I envision developers and games having their own linked community forums and pages to further build a community that in one easily accessible location.

My fear is the price of the PlayStation 4 is too high for consumers. Rumors point to the console being roughly $465 when converted from British Pounds to USD, but is expected to come in at $429 for a basic model and $529 for a premium model. Are consumers willing to pay this amount? Perhaps. It all depends on the games, which is my other fear. While the games shown (Knack, Killzone: Shadow Fall, Infamous: Second Son, Driveclub, The Witness, Watch Dogs, Diablo III, Destiny) looked gorgeous, particularly Driveclub, it wasn’t anything so radically different in graphics compared to the current generation of games. The lighting effects were far better, but this is definitely an incremental update compared to the jump in graphics from Nintendo to Super Nintendo to PlayStation to PlayStation 2 to PlayStation 3 (fun fact: this is the first PlayStation console that doesn’t introduce a new physical medium to the world – PlayStation 1 with CDs, PlayStation 2 with DVDs, and PlayStation 3 with Blu-ray). If what Quantic Dream said is to be believed, the PlayStation 4 is the sweet spot in terms of graphics to not only display and convey emotions non-verbally, but also generate emotions in players – similar to how movies moved from soundless pantomime to vivid colors, full worlds, and dynamic angles with technology. Hopefully we don’t encounter the uncanny valley anytime soon.

Overall, if Sony can bring the PlayStation 4 in at a reasonable price with games people want to play that are different enough from PlayStation 3 and Xbox 360 games, then I believe Sony has a success on its hands. Bonus points to Sony if they can actually put their entire library of games online for streaming although I am a bit skeptical about this due to licensing fees and Sony’s past inability to get their PlayStation 1 library onto PSN. I’m looking forward to Sony revealing more details about the PlayStation 4 over the coming months and seeing what developers are working on; especially Square Enix’s next Final Fantasy title, which is set to be revealed at E3.

What We Know From Today