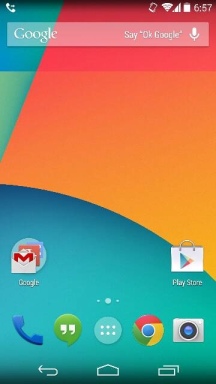 Last week, Google’s announcement of its Nexus 5 phone alongside new version of Android, Android 4.4, aka Kit Kat, brought an end to weeks of speculation and leaks regarding the latest version of Android and the phone that would serve as its flagship device. This is a story Android fans around the world wait for every year since a new version of Android brings with it a ton of new features to look forward to. This year the story was a little different because of the addition of something called the Google Experience Launcher (GEL). What makes GEL so different is that it is exclusive to the Nexus 5. People who update their devices to Kit Kat or people who buy non-Nexus devices with Kit Kat on it in the future won’t be greeted by GEL or have its many enhancements such as easy access to Google Now to the left or voice activation anywhere on the home screen. This may just be temporary and GEL is actually the beginning steps to opening a portal to Google across all Android devices.

For the first time, the Nexus device isn’t a pure Android experience, but more of a pure Google experience that cannot be found anywhere else. Whether or not sibling devices in the Nexus line such as last year’s Nexus 4, updated tablet Nexus 7 (2013), and the Nexus 10 will have GEL once Kit Kat begins to roll out to them in a few weeks is a mystery at this point. Personally, I don’t see why these devices shouldn’t include it – they are also Google devices and should be treated as such, but they may not have it simply because features of GEL, particularly the voice activation, are dependent on the Nexus 5’s Snapdragon 800 processor.

The advent of GEL may be an indication of a new age in Android. GEL means there will be certain features unique only to Google devices, effectively separating itself from the sea of manufacturer skins such as Samsung’s TouchWiz and HTC’s Sense. The creation of GEL should come as no surprise. Facebook did something similar earlier this year when it introduced Facebook Home, which effectively replaced a device’s launcher and lockscreen with a very Facebook experience. At the time, Google praised Facebook’s efforts. It seems Google took a note from Facebook and decided it too should have its own launcher that is pure Google.

However, if Google really is taking a page out of Facebook, then we will more than likely see GEL eventually crossing over onto other devices in the future, which provides Google with an easy way of updating devices without interference. Rumors right now point to GEL being built into future Google Search updates, effectively putting Google’s experience on every Android device. In many ways, this solves the “problem” of manufacturer skins and non-Nexus users not being able to choose “stock” Android. If Google does go this route, then new features can be built into the launcher and updated to all devices without needing to do an over-the-air update through carriers. As we have seen in years past, carriers and manufacturers have been the biggest roadblock to providing devices with timely updates. GEL built into Google’s Search app circumvents this similar to how Google is building more and more of its services into Google Services, which, again, can be updated by users instead of waiting for a new version of Android.

Of course, this won’t make new versions of Android obsolete, but it does make it easier for Google to provide its vision of Android to every user. Whether or not this happens in the future is something we will have to wait and see though. For now, GEL and Google’s true vision of Android can only be experienced on the Nexus 5 although users can also sideload the launcher onto their device of choice. Not only that, but I am sure other popular launchers will integrate some of GEL’s code with their own to provide an even better experience. That is the beauty of the Android system.